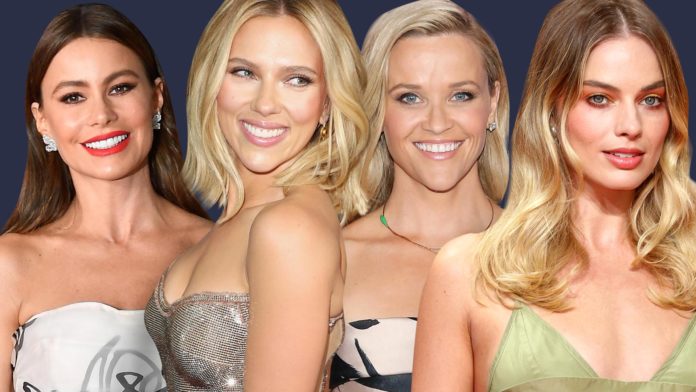 Jennifer Garner was all business when she took the stage at this year’s Forbes Women’s Summit. Thick-rimmed glasses and a black-and-white checked pantsuit. Her sleeves were puffy, and her smile, as always, was big, but everything else—light makeup, a small black notebook—suggested boardroom, not backlot.

And that’s just fine for the former star of the early 2000s TV action drama Alias, a role that landed her four Emmy nominations and a Golden Globe Award.

“Nobody is saying, ‘I’m just looking for a 47-year-old mom who wants to shoot in L.A. and do something about women.’ Unless it’s Reese Witherspoon, that isn’t happening, so you have to make it for yourself,” said Garner, who also had starring roles in the Hollywood films Elektra and 13 Going on 30. What that means for Garner and the rest of the industry’s veteran class of actresses is that the days of just showing up for lines are gone. Taking the reins of the business side of show business is the surest way to create opportunity in an industry that notoriously skews in favor of men. And that has her starring in and producing My Glory Was I Had Such Friends, anupcoming TV series based on Amy Silverstein’s memoir.

The memoir about friendship between middle-aged women is the kind of story that wouldn’t typically get traction among traditional production houses looking for a big return, but Garner saw the potential. She wanted it made—and not on the cheap—so, as she says, “we had to develop for ourselves.” Partnering with J.J. Abrams of Bad Robot, Garner shopped the series around to the usual suspects, which started a bidding war won by Apple, which will stream the show on AppleTV+, one of the new streaming services from technology companies entering Hollywood and upending the way content gets bought and sold.

The irony? Witherspoon, too, had to do it herself. She’s the world’s third-highest-paid actress this year, earning $35 million between June 1, 2018, and June 1, 2019. Like more than half of the women on this year’s list, she’s taken to producing her own star vehicles, including Big Little Lies, which she produced with Nicole Kidman, No. 4 on the earnings list this year. No. 9, Charlize Theron, is a producer of Long Shot, which represented a little less than half of her $23 million payday. The move into producing is creating more female-centered and female-written stories and, in increasing numbers, a more equitable paycheck.

“It’s about time,” says Steve Mosko, the CEO of Village Roadshow Entertainment Group USA, a film and television production entity. “No one thought twice when male actors who had a broad view of the business would take control of their careers or wanted to tell their own stories.”

Take Sylvester Stallone and the Rocky franchise. He started out writing and starring in the original 1976 film. By the second, in 1979, he was also directing, and by the 2015 sequel, Creed, he had joined the business team as a producer. Dwayne Johnson, this year’s highest-paid actor, started a production company, Seven Bucks Productions, in 2013. That’s given him a say on everything from episodes of Ballers to blockbusters like Jumanji: Welcome to the Jungle.

The world’s 10 highest-paid actresses collectively earned about $315 million between June 1, 2018, and June 1, 2019, before fees and taxes. That’s up 69% since last year, but still far less than the almost $600 million the top 10 leading men pulled in. If these business-focused actresses have their way, that disparity won’t last forever.

In a world in which action-packed tent poles with men playing superheroes or super-strong humans often get the highest budgets, there are fewer high-earning opportunities for actresses. According to a 2018 report by USC’s Annenberg School for Communication and Journalism that analyzed 1,100 popular films between 2007 and 2017, only 30.6% of speaking characters were women. When it comes to high-budget action movies, that number dropped to 23.2%. For women of color, the numbers are even worse: Out of the top 100 films of 2018, only 11 films had leads or coleads who were women of color—making it even harder for actresses of color to gain ground, and make big money, in Hollywood.

Take the Marvel Cinematic Universe, which has grossed over $22 billion since 2008. Six stars of Avengers: Endgame—a movie directed and written by men—made this year’s list of the highest-earning celebrities, but, mirroring the gender imbalance within the Avengers, five of them were men and only one, Scarlett Johansson, was a woman.

As the world’s highest-paid actress, Johansson pocketed $56 million in the past year, nearly all thanks to her role as Black Widow. She was the only woman in Endgame who could command eight figures upfront—about $14 million—and about 5% of backend (with a gross of $2.8 billion, that adds up to about $35 million). While that’s one of the best deals in Hollywood for any actress—or actor for that matter—in today’s market for movie talent, where enormously profitable arrangements were made for top stars in exchange solely for their acting services, it pales. Julia Roberts at her peak was reportedly able to bank the now extinct twenty-twenty deal, or $20 million upfront and 20 first-dollar backend points ($100 million on a $500 million box office hit), for films like 2000’s Erin Brockovich.

It’s a step forward, for sure. But for true parity, it’s not just Hollywood that has to change. Culture will have to shift too. Female-focused films will have to be as popular as action films, or women will have to play their superpowered and indestructible stars.

Women like Witherspoon, Kidman, Theron, Jennifer Aniston, Margot Robbie, Elisabeth Moss and Ellen Pompeo—all of whom are among the highest-paid actresses—are working to advance this. As producers, they can ensure female-focused stories are made and that actresses are paid as much as actors. Plus, as executive producers, they collect a little bit extra for themselves.

“We’re thinking about reaching women where they live, on their laptops or on their mobile phones,” Witherspoon told Forbes of her media company Hello Sunshine.

Take Big Little Lies, produced by and starring Witherspoon and Kidman. Witherspoon had read the Liane Moriarty novel of the same name and knew she wanted to make it into something for the screen, in large part because of its dynamic female characters. (Witherspoon had previously—and successfully—bought the rights for and produced Gone Girl and Wild.)

“We need to see these things because we as human beings we learn from art, and what can you do if you never see it reflected? I feel like I constantly see women of incredible talent playing wives and girlfriends in thankless parts. I just had enough,” Witherspoon said at 2017’s Television Critics Association press tour. “I thought that was a really unique opportunity to have so many incredible parts for women in one piece of material.”

More parts for women means more actresses making top salaries. Witherspoon and Kidman made the most among the ensemble cast of Lies, each earning $1 million per episode in the show’s second season.

Witherspoon struck a similar deal with The Morning Show, a forthcoming series also slated for Apple TV+. This time, she partnered with Aniston, who earned $28 million in the past year, to produce and act in the series. The payout was $1.2 million for each of ten episodes—which is one reason why the series will reportedly cost more than Game of Thrones’ record $15 million per episode.

“It’s a way for women to work on the gender pay gap—producing and coming up with their own projects,” says one talent agent, who represents some of the world’s top female talent. “They work together to raise everybody up together. And when you can point to the fact that a show would not exist without your client’s work, you are in a place where you can demand more.”

The proliferation of actresses as executive producers wouldn’t be possible without the arrival of streaming services, including from Netflix and Amazon, as well as others like Hulu and Disney+ that were created by the industry’s more traditional production houses. The new services are shaking things up while also spending billions on content.

“There are great stories to be told from a female perspective, and phenomenal women to tell those stories. Now there are more places to do it,” says Mosko.

Actresses are also joining the producing teams of their own films, guaranteeing them a piece of the backend. Robbie, who earned $23.5 million in the past year, is taking a producer credit for the forthcoming Birds of Prey (and the Fantabulous Emancipation of One Harley Quinn), which helped boost her upfront pay to $10 million. Theron recently starred in and produced Long Shot; out of a budget of reportedly only $40 million, she made about $9 million.

“I am in full support of women taking ownership of their voices, their dignity and their worth and speaking up,” Theron told Forbes.

That’s a feeling that seems to be echoed by many actresses in post #TimesUp Hollywood who want to reclaim both the narrative on screen and the dealmaking that goes on behind the scenes. In fact, a number of #TimesUp’s prominent leaders and members, like Witherspoon, America Ferrara and Kerry Washington, have taken the producer reins.

Another hopeful sign? For years, Paramount was the only major studio with a woman at the helm—Sherry Lansing—a Hollywood legend who served as its chairman from 1992 to 2005, but now more and more of Hollywood’s corporate power structure includes female executive talent. Jennifer Salke was named the head of Amazon Studios last year, Ann Sarnoff was named CEO of Warner Bros. in June, and, with the Viacom-CBS merger finally coming to fruition, Shari Redstone has ascended to hold more power than ever in the business. And the more women behind camera, the more opportunities for actresses—and their wallets.

Below is the full list of highest-paid actresses, including seven women who were producers on their own projects. Earnings estimates are based on data from Nielsen, ComScore, Box Office Mojo and IMDB, as well as interviews with industry insiders. All figures are pretax; fees for agents, managers and lawyers (generally 10%, 15% and 5% respectively) are not deducted.

The World’s Highest-Paid Actresses Of 2019

The Grey’s Anatomy star proves network television isn’t dead quite yet. She earns about $575,000 per episode to star in and produce the ABC hit show.

For the upcoming Birds of Prey (and the Fantabulous Emancipation of One Harley Quinn), Robbie will serve as a producer as well as reprise her role of Harley Quinn. The paycheck? Eight-figures up front.

The Emmy winner serves as executive producer on her Hulu star-vehicle The Handmaid’s Tale.

Until The Big Bang Theory ended earlier this year, Cuoco was part of the highest-paid cast on network television, earning $900,000 per episode.

The Friends star is coming back to television, starring in and producing Apple TV+’s The Morning Show.

After wrapping up season two of Big Little Lies, Kidman continues her busy year with starring roles in Bombshell and The Goldfinch.

Witherspoon has embraced the title of producer. She will produce, though not star in, upcoming film Lucy in the Sky and Truth Be Told.

The eleventh and final season of Modern Family premieres this fall, but Vergara’s wallet will be just fine: she still has her lucrative entrepreneurial ventures, including Sofia Jeans and a furniture line at Rooms To Go.

Johansson is the world’s highest-paid actress thanks to her lucrative role as Black Widow, for which she earns an eight-figure check plus backend points on Marvel films.

The US and the Taliban are Inching Closer to a Peace Deal. It Could all Still Fall Apart.