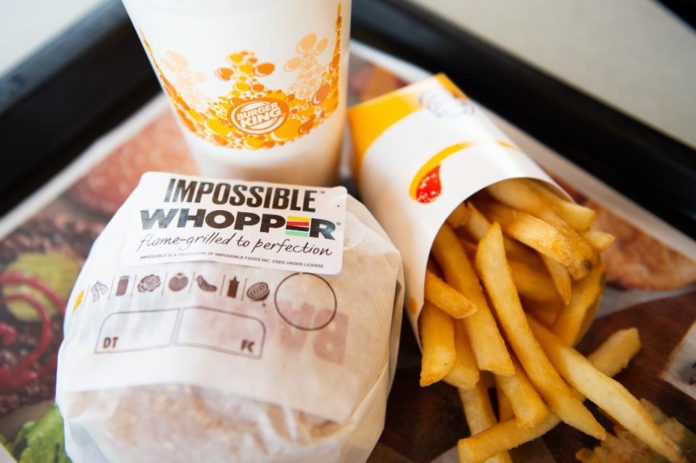 Canada’s leading fast food and coffee chain, Tim Horton’s, is now offering plant-based patties for breakfast, lunch and dinner. The company partnered with Beyond Meat last month and has since launched three new plant-based breakfast sandwiches and two Beyond Burgers for their lunch and dinner menu.

Meanwhile, in April, Burger King introduced the Impossible Whopper: a plant-based alternative to the Whopper in partnership with Impossible Foods.

Two major fast food companies working with different plant-based substitutes for meat should not be odd, but since Tim Horton’s and Burger King are sister companies, it is. Both companies have been under common ownership since their merger in August 2014.

Tim Horton’s and Burger King’s parent company, Restaurant Brands International (RBI), may be strategizing to reduce their risk of loss – that is to say, RBI could be hedging.

By diversifying its partnerships, RBI is less likely to lose everything. If either Impossible Foods or Beyond Meat falls, the other is likely to rise in its place. As media outlet Marketplace put it, they are the Coke vs. Pepsi of the alternative meat world.

Beyond Meat and Impossible Foods are neck and neck. Though their target markets used to differ – Beyond Meat began by focusing on retail settings while Impossible Foods targeted restaurants – both are now trying to expand as widely as they can in the plant-based food market (with few other major competitors such as Tyson Foods, Nestlé Sweet Earth, and Before the Butcher).

Beyond Meat’s stock is up 720% since its IPO in May, while Impossible Foods is still privately held. However, before Beyond Meat began trading, the “Impossible Burger” was searched 400% more than “Beyond Burger.”

Even now, the Impossible Burger may be the more popular choice among consumers. According to recent sales data from Bareburger, a New York City-based restaurant that offers beef, Impossible, and Beyond patties, the Impossible Burger is the most popular plant-based option among their customers. Bareburger culinary director Jonathan Lemon shared, “Consumers often comment that Impossible looks more like a ‘real’ burger and they are partial to the fact that it can be cooked to different temps.”

The chief operating officer of RBI, Josh Kobza, did not explain the choice of varying Tim Horton’s and Burger King’s partnerships as a hedging tactic. Instead, he offered: “Our brands select partners based on what’s best for a particular market and their guests. Beyond Meat and Impossible each offer different products with distinct flavor profiles. For example, at Burger King, we knew that a plant-based Whopper sandwich had to be flame-grilled in order to stay true to the taste of the original Whopper which our guests know and love – and the Impossible patty was a perfect fit. At Tim Horton’s, we wanted our breakfast sandwich to taste similar to our regular Tim Horton’s sausage patty, a breakfast favorite, so we worked with Beyond Meat to develop a Beyond Breakfast Sausage patty that did.”

Since Tim Horton’s uses convection ovens to cook their meat, finding a way to cook Impossible patties (which are meant to be prepared in the same way as beef) would have been an added hassle. This also explains why Tim Horton’s opted for the plant patty instead of true beef. There was no specific agenda to protect the environment or animals at play – RBI simply saw Beyond Meat to be the sensible choice.

Since Canadians on average eat less meat than Americans, perhaps it is more fitting for Tim Horton’s to use the veggie-apparent Beyond Burger while RBI’s American brands put the more meat-like Impossible Burger to work.

Airbnb CEO pledges to verify all home listings by 2020