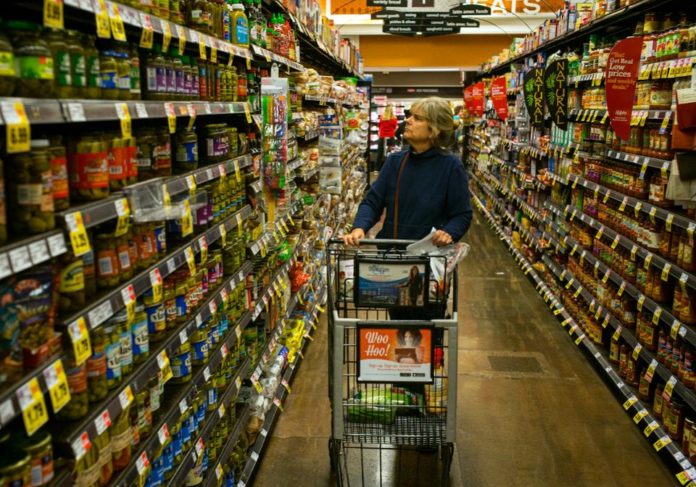 Those stores’ share of U.S. food and consumable products consumption last year dropped 2.5 percentage points, to 35% of the $1.25 trillion market, according to Inmar Analytics’ 2019 Future of Food Retailing Report, released Wednesday. By 2023, the analytics firm forecasts, traditional supermarkets’ share will decline to under 33%.

Another way to look at the change: When including small, natural, limited- assortment and other types of grocers, the entire traditional grocery space has seen its hold on American households slide more than half, to a 44% share, from 90% 30 years ago, the study shows. Today In: Business

Where are consumers shopping instead? Supercenters led by Walmart and wholesale clubs like Costco have picked up share to represent 20% and over 9% of U.S. food and consumables purchases last year.

Dollar General and other dollar store chains, which have added coolers and doubled down on produce and other grocery sales, have also picked up share.

Not all traditional grocers have lost ground. “Limited assortment” grocers like Trader Joe’s, Aldi and Lidl that often win consumers on prices with their narrower store brand assortment and “fresh format” supermarkets like Wegmans and Amazon’s Whole Foods have also won consumers’ grocery dollars, according to the study.

Online sales of food and consumables jumped nearly 22% to $58 billion last year, led by Amazon’s 23.5% jump to $21 billion, according to the study.

The shifting consumer behavior and increased competition have put traditional supermarkets, led by Kroger, on their toes. Kroger in late 2017 started a three-year plan to “Restock Kroger,” a key part of which involves making itself an “omnichannel” retailer and meeting consumer demands how, when and where they want.

Kroger, which operates about 2,760 stores under names including Harris Teeter and Ralphs, on Thursday reported its best quarterly comparable sales since its revamp plan began. Online sales jumped 31%.

It said it has expanded grocery pickup to 1,780 locations and delivery to 2,225 to cover about 95% of its target households. It’s also working with European online grocery retailer Ocado to build automated warehouses to fulfill e-commerce orders.

Kroger has also bought meat-kit company Home Chef to meet increased convenience demand. With private label an increased focus for retailers including Amazon and Target, Kroger said Thursday that its own line of store brands saw sales rise 3.1% as it rolled out 203 new items during the quarter.

It’s also opened Kroger Express and Kroger Pickup test stores at some Walgreens’ drugstores. In another major move, in July it named creative ad agency DDB New York, which has clients including McDonald’s and M&M’s parent Mars, as its first-ever Agency of Record to help come up with a “refreshed, stronger brand” to drive visits.

Still, its fight against other larger retailers won’t be easy. In one example, even though Kroger has invested in cutting prices, studies have shown that Walmart typically has a lower price lead.

Kroger is the No. 2 U.S. brick-and-mortar grocery seller, with a 9% share of the market in 2018, trailing only Walmart and its 26% share, according to Euromonitor data.

Meanwhile, increased investment behind online and other initiatives pressures the bottom line. The company disappointed Wall Street on Thursday by not reconfirming a three-year $400 million in incremental operating profit it had expected. It said it would now wait until its investors’ day in November to give an update.

“Transformation is incredibly difficult,” Kroger chairman and CEO Rodney McMullen said on a call Thursday. “We continue to make significant investments to redefine the grocery customer experience. The seamless experience is essential to the customer experience both today and tomorrow.”

And that outcome may help decide if traditional supermarkets can finally stem their combined share drop.