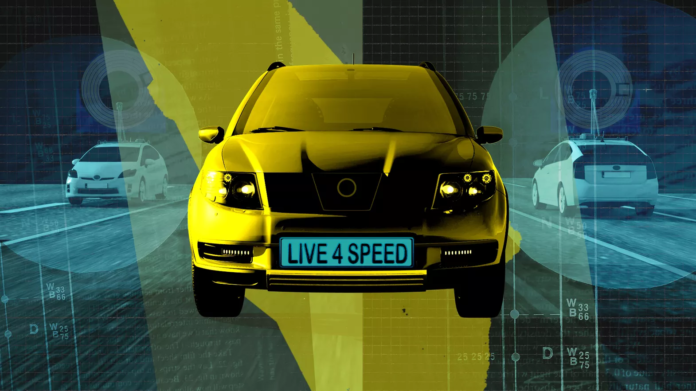 A free-spending heir to the Vanderbilt family fortune, William Kissam Vanderbilt II bought his first car in 1899. Many more followed, though the machines were obscenely expensive. A notorious daredevil among his millionaire set, he once did 92 mph at Daytonain a machine that had the structural integrity of a soapbox derby car. He tore dangerously around the mansions of Newport, Rhode Island, but always went free when the police nabbed him. His chauffeur took the rap.

Why did he do it? Willie confided to an interviewer that his inherited wealth was “as certain death to ambition as cocaine is to morality.” Racing gave Willie a thrill and excitement his life otherwise lacked. A motoring journal expanded on this theme in 1902: “In Europe it is openly recognized that the main excuse for the speed mania is the desire to feel new sensations and juggle away the emptiness of a purposeless life.”

More than a century later, led by Uber, Lyft, Tesla, and others, Silicon Valley is selling the dream of the driverless car. Its proponents tout its potential to save lives, ease traffic, and free us from the scourge of driving. Robot cars, they say, will let cities tear up parking lots (robots never rest) and replace them with affordable housing. Some describe them as a dream long held, a burning desire that at long last automakers have the technology to fulfill.

The full-on driverless car could be an order of magnitude safer than the human-driven variety.Despite generations of driver education, traffic policing, highway building, and automobile safety regulations, nearly 40,000 Americans are killed in motor vehicle crashes and another 2.5 million are seriously injured annually.Safer cars, like safer airliners, are a good thing. But since Vanderbilt’s time, the controlled risk of driving has been an antidote to meaningless work and passive leisure.

Driving is dangerous, and we like it that way. We may never love driverless cars the way we love the recklessness of being behind the wheel.

The thrill we get from driving has a real psychological and even physiological basis. In their book Driving Passion, Peter Marsh and Peter Collett describe the way acceleration causes muscles to tighten and create a “sharply tingling experience, which is perceived as intensely pleasurable.” As a passenger, all you might feel is fear, but at the wheel, “Acceleration is under one’s control, and the result is a flush of bodily sensation that some people liken to a sexual orgasm.” Don’t expect la petite mort riding in the backseat of a driverless car. If your robot driver gets randy, you can only expect motion sickness.

Traveling at speed brings a meditative focus. The field of vision narrows, reducing the driver’s world to the scene outside the windshield and the instruments on the dash. The potential for catastrophic failure occupies and thereby empties the driver’s mind the way a chanted mantra clears a yogi’s head. Think back on your trip to work in the morning, or the commute home last night. In theory, you were paying close attention to avoid an accident. But what can you really claim to remember? Was the light at Elm Street amber? Was the car in front black or gray? If everything went smoothly, you likely will remember nothing at all. Driving occupied your conscious mind, freeing your unconscious to be somewhere else.

This meditative state of partial attention should not be confused with distracted driving. The persistent connectivity provided by mobile phones has allowed work, family obligations, rich media, and social marketing to follow us into the car. Attuned to our smartphones, driving itself becomes the distraction.

The latent violence of the automobile — expressed through automotive design and marketing — allows many drivers to act on those same impulses that impelled Vanderbilt more than a century ago. A famous BMW ad shows Clive Owen driving maniacally, tossing Madonna around violently in the back seat aspunishment for her brattiness. A young woman in yoga pants batters her SUV into a curbside parking spot. A Mercedes literally blows the doors off the competition.

The Desert Storm militarism of the Hummer has given way to the all-black Suburban of the Forever War. Press kits include references to “gunport” windows and a vehicle’s “aggressive stance.” Ford builds the Raptor pickup; Fiat-Chrysler produced the Demon; Dodge has its Ram. In his review of the Ram 1500, Tom Voelk, a veteran car critic and video host,noted with approval, “It looks as if it would win a bar fight.” It is no wonder that drivers are migrating from sedans to compact crossovers — diminutive, car-based SUVs — with their elevated seating position. Against such predatory machines, along with gargantuan models such as the Sequoia, Titan, and Armada, everyone needs to up armor and fight for the high ground.

Even cars accelerate more quickly, negotiate curves more gracefully (my car handles well, we say), and brake more confidently than ever before. As for us, we drive faster, more aggressively, and with less margin for error than our grandparents ever did.

At the turn of the 20th century, driving a gasoline automobile combined the command of explosive power and its inherent threat of violent death. But electric vehicles were quite viable. They started with a flick of a switch while the thrusting pistons of the “hydrocarbon explosion” car had to be tickled and muscled to life. They stopped reliably, ran quietly, and had plenty of range to serve the daily needs of nearly every driver. Elihu Thomson, who with Thomas Edison was a founder of General Electric, built a handful of electric cars. For years, one ferried corporate visitors from the train station to the GE plant in Lynn, Massachusetts. But the electric car would never sell in numbers, Thomson eventually concluded, saying, “It’s too tame.”

Other automotive pioneers agreed that men would never buy genteel electric vehicles for themselves, so they marketed them as perfect cars for the little lady. In fact, Henry Ford bought his wife, Clara, a 1914 Detroit Electric outfitted with tufted velour, crystal vases, and a glass windshield and windows at a time when Model Ts were open to the elements. There’s no evidence, however, that the sedate electric appealed more to women than it did to men. By 1917, there were only 50,000 electric vehicles registered, compared with 3.5 million internal combustion engine cars.

The rapid growth of automobility after World War I might have tempered enthusiasm for driving too fast and too recklessly. Ironically, the rising danger — the driving death toll multiplied three and a half times in just over 20 years while the population grew by only about 25 percent — may have only made things worse. Industry and government safe-driving propaganda and public school driver education unintentionally glamorized the gore.

In 1935, Reader’s Digest published a watershed article, “And Sudden Death,”intended to shock people into driving more safely.Author J.C. Furnas recounted the accidents he saw: “A hysterical woman with her screaming mouth opening a hole in the bloody drip that fills her eyes and runs off her chin . . . the raw ends of bones protruding through flesh in compound fractures, and the dark red, oozing-surfaces where clothes and skin flayed off at once.” The Digest, which had the largest circulation of any periodical at the time, warned, “You’re gambling a few seconds against this kind of blood and agony and sudden death.”

Not us, we think.

Spurning safety, and the speed limit

There will be no need for such advertising, designs, or performance when we all become mere passengers in driverless cars. Robots, of course, won’t drive aggressively, or get a charge out of bullying a little hatchback at an intersection (as back seat drivers, we won’t want them to). They’ll move at the most efficient speeds, always obeying the rules.

In the past, we achieved safety in other ways. Seat belts began to appear in American cars in the 1950s, and with the passage of the Motor Vehicle Safety Act of 1966, they became government-mandated equipment. Today, every car sold is a joint venture between the automakers and government. Rules now dictate tire integrity, roof strength, door latches, steering wheels, knee bolsters, bumpers, lights, seats, safety belts and shoulder straps, air bags, and window tinting.

The American automobile has become a wandering womb protecting a fetal driver. Federal crash tests require that the car crumple to absorb the blow when we crash, as the average driver does every three years. The vehicle sacrifices itself to save its occupants. Inside, a white pillow inflates explosively — in milliseconds — to nestle the driver, while an air-filled crinoline curtain explodes from the roof edge, to envelop the scene, not for modesty but to save us from ourselves.

Car buyer superegos have welcomed these improvements and choose safer models, all other things being equal. Yet driver ids demand excitement. Unspirited driving is not our thing. A case in point: the speed limit. Initially enacted in 1974 to save fuel, the 55 mph national limit was kept on as a safety measure long after the gas crisis had passed, sparking a full-on driver revolt. Like Burt Reynolds in Smokey and the Bandit, during the Me Decade,we warned each other of bear traps over our CB radios. Truckers staged a protest, blocking the freeways and marching (well, driving) on Washington. The government tried to slow us down: Some states doubled the size of their highway patrols.

Overwhelming public opposition finally led Congress to begin relaxing the limit in the 1980s and, finally, to repeal it entirely in 1995. As states raised limits to 65, 75, and on one stretch of Texas highway, 85 miles an hour, fatalities rose as well — as safety advocates had predicted they would. Before you condemn earlier generations, try driving 55 on an open stretch of interstate. You will understand immediately what that 1902 journalist meant by an empty and purposeless life. (It’s worth adding that the most expedient way to reduce the carbon footprint of the national vehicle fleet would be for drivers to slow down: Every 10 miles over the highway speed limit cuts fuel economy by about 15 percent.)

Drivers refuse to be tamed, so they want to cut us out altogether.

“Today, 94 percent of traffic accidents involve driver error,” Transportation Secretary Elaine Chao said in 2017 as she introduced federal regulations designed to encourage further development of driverless cars. Anthony Levandowski, the engineer who headed up driverless car projects for Google and then Uber, told Burkhard Bilger of the New Yorker, “Once you make the car better than the driver, it’s almost irresponsible to have him there.” Kyle Vogt told Forbesthat his horror over road deaths helped him find in driverless cars his “true calling.” He sold Cruise Automation, his driverless car startup, to GM for $1 billion.

I certainly look forward to the end of road deaths, but I do wonder where we’ll find our thrills instead. Perhaps there will be a roller coaster building boom, or after-work bungee jumping will become a thing. Meanwhile, please drive carefully.