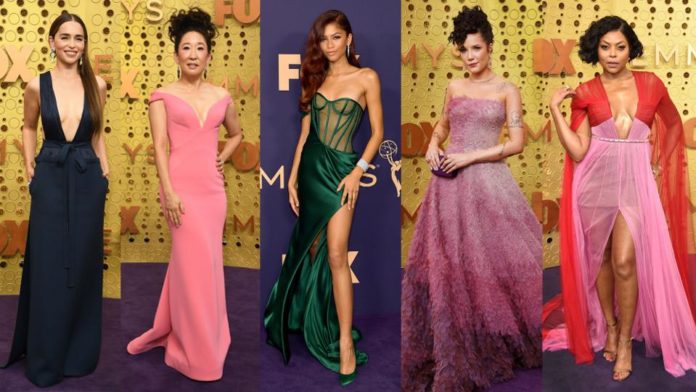 The stars of tonight’s Emmy Awards had their sights—and wardrobes—set on the future: from political statements to spring colors, all eyes were on what’s next.

For Laverne Cox, that involved the Supreme Court. The Orange Is The New Black star and her plus one, Chase Strangio, a lawyer with the ACLU’s LGBT & HIV Project, used the event as a platform to raise awareness for an anti-discrimination case Strangio is arguing on October 8. The case will decide the legality of an employer firing workers based on gender identity or presentation.

Cox paired her tulle Monsoori gown with a custom Edie Parker rainbow clutch that advertised the event. “It’s about raising awareness so everyone knows that our lives are in danger,” she told E!. Today In: Lifestyle

For others at the Emmys, the carpet was a time to be their most comfortable—even if it didn’t always look it. Pose star Indya Moore, who is transgender and non-binary, strutted in their custom Louis Vuitton gown’s sky-high slits. They were unphased by the dress’s risqué elements, telling E!, “it’s more tricky to exist than it is to walk in this dress.”

Other highlights? Celebrities were rosy for reasons other than the 90-degree temperatures—dusty pinks and mauves were sported by everyone from James Van Der Beek to Halsey, while stars like Mandy Moore and Taraji P. Henson paired a brighter hue with cherry red for the ultimate Valentine’s Day ensemble.

The highly-anticipated carpet-goer, Billy Porter, kept things (relatively) muted for this event, trading his tuxedo-gowns for a disco-Western ensemble by Michael Kors Couture. The pinstriped suit was matched with an asymmetrical cowboy hat and Rick Owens platform heels.

Meanwhile, Zendaya channeled the Disney princesses of her past in an emerald Vera Wang Couture number. The silk body with mesh bodice—paired with reddish waves—make the case that things are pretty great above the sea too.

Can the millennials save Playboy?