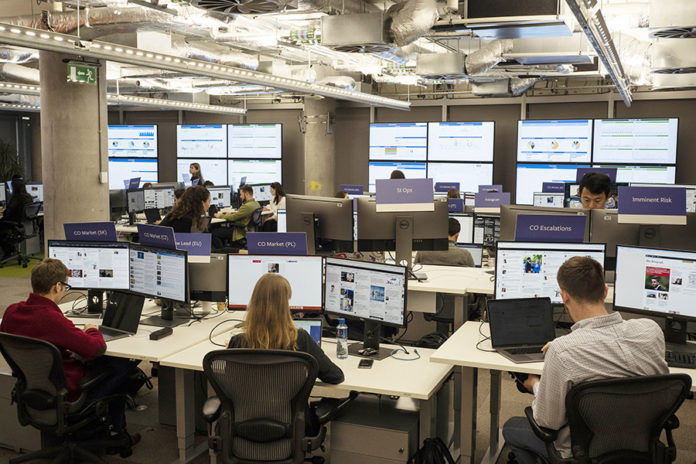 The social network is bracing for the 2020 US presidential election, and has its work cut out to reduce the spread of online disinformation

Facebook employees work at the company’s integrity center in Dublin, May 2, 2019. Facebook on Aug. 28 said it was strengthening how it verifies which groups and people place political advertising on its site, as the social network braces for the 2020 presidential election in the United States and works to reduce the spread of online disinformation. Image: Paulo Nunes dos Santos/The New York Times

Facebook said Wednesday that it was strengthening how it verified which groups and people place political advertising on its site, as the social network braces for the 2020 U.S. presidential election and works to reduce the spread of online disinformation.

The moves build on rules that Facebook introduced last year, when it began requiring political advertisers to divulge the name of the organizations responsible for ads on its platform and to prove their identities. Facebook enacted that policy after being criticized for allowing Russian operatives to manipulate its ads in the 2016 U.S. presidential election to divide voters.

Under the new rules, advertisers will need to further demonstrate that they are registered with the U.S. government, Facebook said. That will require submitting proof such as an employer identification number, a Federal Election Commission identification number or a government website domain. Smaller businesses will need to provide a verifiable phone number and business email address, the company said.

Facebook said its advertisers must submit the additional documentation by mid-October or it would pause noncompliant ad campaigns.“

We truly understand the importance of protecting elections and have been working for quite some time to bring greater transparency and authenticity to ads about social issues, elections or politics,” said Katie Harbath, Facebook’s public policy director for global elections.

Over the past few years, Facebook has struggled with questions about election interference and disinformation on its platform. The social network has worked to secure its site during elections, setting up so-called war rooms to handle false content and bad ads during the 2018 U.S. midterm elections, as well as the national election in India this year and the European Union’s parliamentary elections. It also rolled out the transparency policy on political advertising.

Yet Facebook has applied its political advertising policy inconsistently. NBC News recently found that one political advertiser had sidestepped Facebook’s rules and was running ads under decoy company names. Last month, academics also called the social network’s ad archive — a tool Facebook introduced in late 2018 to allow the public to analyze political ads and ferret out disinformation campaigns — “broken,” describing it as riddled with bugs and technical issues.

Harbath said that Facebook’s tools were not perfect and that it would “continue to learn from elections in the U.S. and around the world.” Facebook alone cannot tackle political disinformation in ads, she said, adding that advertisers, governments, regulators, journalists and researchers will need to participate in addressing the global disinformation problem.

Disinformation experts said the social network was still far from fixing the damage caused by the false news and ad campaigns that had run on the platform.

“This is all much too little, much too late,” said Dipayan Ghosh, a fellow at the Shorenstein Center at Harvard and a former privacy and public policy adviser at Facebook. “We’ve seen incredible impacts coming from illegitimate political ads, including from seemingly legitimate actors. And companies, particularly Facebook, are not doing enough to protect the public and our democracy.”

He added that Facebook’s new verification policy amounted to “incremental baby steps forward.” That would “not particularly position us well in the lead-up to elections,” he said.

Graham Brookie, director of the Atlantic Council’s Digital Forensic Research Lab, said Facebook’s new ad transparency rules were “a welcome step,” although he added that the company could do more to ensure transparency in elections.

“Government, media and tech are all needed to take collective action to ensure transparency in elections, especially online,” Brookie said. “Our Congress needs to act to codify these types of ad transparency measures.”