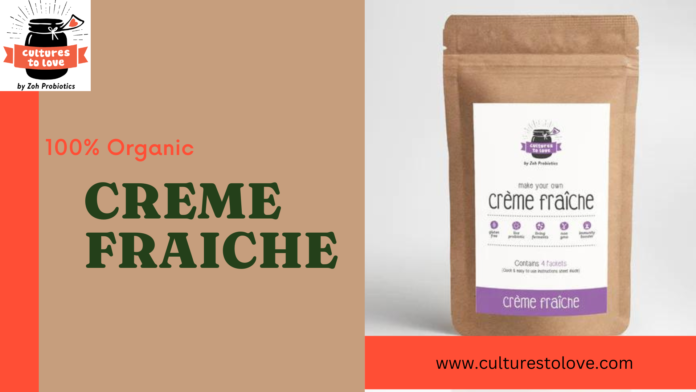 Creme fraiche, called the same in America as in France where it originates (correctly spelled “Crème Fraiche”), is a cultured cream, meaning it has been soured and thickened with bacterial culture. Compared to sour cream, it has lower water content and higher fat content. It has a nutty, tangy flavor that adds acidity to any dish. At the best price, buy crème fraiche online in India.

What Is Creme Fraiche Used For?

What Is A Substitute For Creme Fraiche?

In America, widely available sour cream can be used to substitute creme fraiche but with clear limitations. Because sour cream, unlike creme fraiche, curdles when added to simmering or boiling dishes, add it to hot dishes only after taking your pot off the heat.

Sour cream should be used with caution to substitute creme fraiche because the two are different. Sour cream has only about 20 percent fat content (compared to creme fraiche’s 30 percent), and it gets its thick consistency from adding milk solids and stabilizers. However, it has a similar tangy taste, as both are cultured.

Mexican crema and Greek yogurt can be substituted for creme fraiche, but like sour cream, they should not be added to a cooking soup or sauce.

What Is The Difference Between Mascarpone And Creme Fraiche?

The consistency between mascarpone and creme fraiche might seem somewhat similar, but they are different dairy products. Mascarpone is a curd cheese made of cream that has been curdled by adding tartaric acid for thickening. Mascarpone has a sweeter taste than creme fraiche. It is more solid and therefore added to fillings of savory dishes and desserts such as tiramisu, where a thick, not at all runny consistency is required. Creme fraiche, on the other hand, is soft enough to be easily dissolved in sauces and soups, so creme fraiche buy online.

In flavor, creme fraiche is slightly tangy and acidic. Sour cream can be exchanged for creme fraiche in some recipes; however, the taste of creme fraiche is more refined, and the two products have essential practical differences. Creme fraiche has the advantage that it can be whipped to a smooth, thick cream, and it can be cooked without splitting or curdling.

Where To Buy Creme Fraiche

Recipes using creme fraiche have become increasingly common, but until recently, it was only available at specialist food stores and farmer’s markets – much to the frustration of home cooks. However, supply has gradually caught up with demand, and creme fraiche is now available from major supermarkets. Good-quality local and French brands are readily available at delis and gourmet food shops.

What Do You Use Creme Fraiche For

Creme fraiche is an excellent substitute for cream or sour cream in many recipes. Creme fraiche is also ideal when cooking because it can be heated without the risk of curdling, so it’s perfect for making thick, velvety sauces. Dishes that use creme fraiche include cakes, dips, sauces, pasta, and finger food. Buy creme fraiche online through Cultures To Love. Browse through our website for more detail!